The store will not work correctly in the case when cookies are disabled.

Bats are a vital part of our ecosystems and putting a bat box up on a wall of your house is an amazing way of helping nature.  Natural roosting sites are in decline so this makes a massive difference to our bats.

Bats are a vital part of our ecosystems and putting a bat box up on a wall of your house is an amazing way of helping nature.  Natural roosting sites are in decline so this makes a massive difference to our bats.

Bats in your Garden

Although bats are frequently seen in gardens, many species are in decline due in part to a loss of habitat. You can help bats by providing additional roosting spaces in the form of Bat Boxes. We have a wide range, including build in boxes so you can discreetly include a bat box in your development. Whatever size bat box the ideal location is fairly high with a clear flight path in and at least some direct sunlight during the day.

Bats are amazing animals that are important to ecosystems in the UK and worldwide. We have 18 species of bat in the UK, all of which are protected under European law. Bat populations in the UK have declined dramatically over the past century due to persecution and habitat loss. However, some UK bat species have recently shown some signs of increasing so there is hope.

Bat boxes are artificial roosts designed to provide bats with alternative resting places or to encourage bats into areas where there are few existing suitable roost sites. There are various designs of bat box; wooden boxes that you can make yourself, ready-assembled external boxes for buildings and trees, and even integrated bat boxes that can be built into walls.

Providing bat boxes can increase opportunities for roosting bats but it can take a while for bat boxes to be used regularly, particularly where a number of suitable alternative roost sites exist. Bat boxes can have an important additional function in encouraging interest and educating members of the public about bat conservation. The correct design and placement of boxes will help increase the likelihood of their uptake by bats.

Knowledge of what bat species are in your local area and their preferences will help you choose the best possible box. Some species such as horseshoe bats and grey long-eared bats do not use bat boxes.

Microclimate within a new roost is a very important factor in terms of increasing the chance of successful uptake by bats. In general, they prefer warm spaces in the summer for rearing young and cooler spaces in the winter for hibernation. The box should be draught proof and made from a thermally stable material such as untreated wood, ecostyrocrete, woodcrete, brick or stone. If possible, it’s better to provide several internal chambers so that the bats can move around.

Structures for summer roosting should be positioned where they are sheltered from the wind but unshaded for most of the day. Summer maternity roosts (in the northern hemisphere) should be on a south-easterly to south-westerly aspect. It is always best to provide a number of different options for bats so that they can choose the most appropriate temperature based on their needs. This can be achieved by grouping a number of bat boxes each with a different aspect; two or three boxes is preferable to one, although a single box still has a chance of being used depending on the bat species that use the local area. Three boxes can be arranged around the trunk of larger trees – see below for details about putting up bat boxes.

Bat boxes are more likely to succeed in areas where there is a good mixture of foraging habitat, including trees, and a source of water (most maternity roosts are located within a short distance of permanent fresh water such as a stream, pond, river or lake). Bat boxes in areas with few other roosting opportunities are also likely to be more successful.

Bat boxes should also be located close to unlit linear features, such as lines of trees or hedgerows. Bat species use these features for navigation between their roosting sites and feeding grounds and to avoid flying in open and exposed areas. Ensure the bats approach to the box is not impeded, for example by branches – clear away underneath the box so the bats can land easily before crawling up into the box.

Size of the Bat Box

The most frequently used bat boxes are small and only suitable for crevice-dwelling bat species.

Crevice dwelling bats crawl into their roosts via small gaps around 15-20mm high. Roughened vertical surfaces or landing areas allow better access (by landing and crawling), although horizontal landing perches should be avoided as these are not necessary, may even deter bats and encourage birds to nest within the bat box.

Bats are nocturnal and adapted to low light conditions. Artificial light sources should not be directed onto bat boxes or flight paths as most bat species find artificial lighting very disturbing.

If possible, make or purchase bat boxes with an entrance slit along the bottom so that accumulated bat waste can drop out of the box or be pushed out as bats emerge. This will also help stop birds nesting in the box and blocking the entrance, which can happen with bat boxes that have entrance holes in the middle. 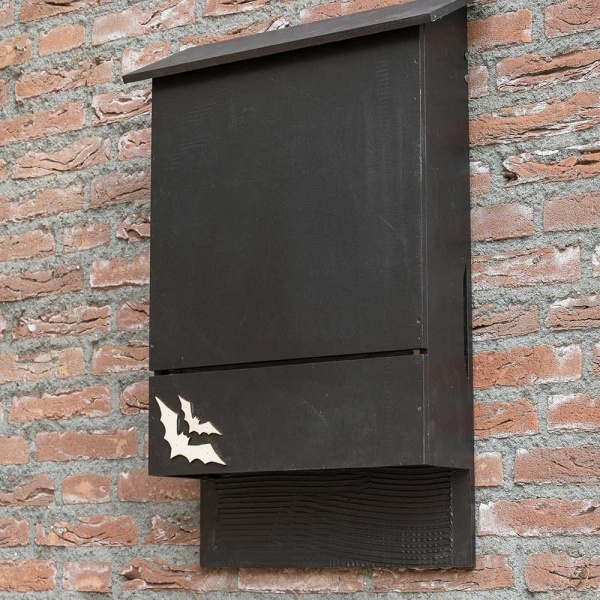 Most bat species will use higher positioned boxes (around 4m up); assess the risk of working at height when undertaking the installation, then place the box as high as it is safe to do so. This will also help protect bats from vandalism and falling prey to cats. If working in the public realm, try to locate boxes so they are not above public walkways. Ensure the boxes are appropriately fitted, to avoid the risk of them falling off. The boxes should be checked at least annually and after high winds to ensure they are still securely in place.

Place the boxes high up by the eaves on a building, which can also help shelter the box from the weather. As detailed above, the aspect of the box should capture sun for part of the day if the intention is to attract maternity colonies.

Gazebos, garden walls and sheds have been suggested as sites for bat boxes. However, the main danger is that the boxes are not high enough above the ground, the structures may not be robust enough to support the box in high winds and the boxes are too visible to predators or vandals.

Consideration should be given to tree growth and boxes may need rehanging over time, regularly check boxes to assess this. Use headless or domed nails not fully hammered home to allow the tree growth, again regular checks will ensure that this allowance can be made while still being securely fitted. Iron nails can be used on trees with no commercial value. Copper nails can be used on conifers, but aluminium alloy nails are less likely to damage saws and chipping machinery.

Making and putting up bat boxes is a great conservation action but what is even more useful is to know whether they are being used, when and by which species.

How long before bats will use the box?

Sometimes it can take several years for bats to find a new box. Be patient! Slow (or no) uptake may be due to the availability of other roosts locally. Sometimes, however, bats move in within months or even weeks!

How will I know if the box has been successful?

To check if the box is being used, look out for droppings and urine-staining on the vertical ‘bat ladder’ below the box and listen for ‘chattering’ during the day, especially during the summer months. You can also watch the box for an hour either side of sunset to observe any bats leaving to feed, or around dawn to see any bats returning to their roost. Bats may be observed by looking up into the box from below, however no light should be used as this may disturb any bats that are present.